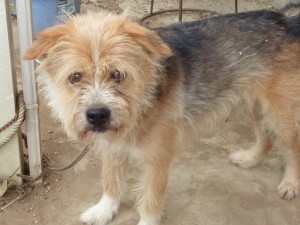 During the summer of 2010, my neighbours moved out. Three days after they left, their dog was still at the house. (This is a picture of him when I found him. Note the very short leash.) I asked around the neighbourhood and no one seemed to know what was going on. As I was going out of town the next day, I asked one of my other neighbours to look after him while I was away. During the time that I was gone, the dog’s owners came and picked him up.

When I left my house to go to work one December morning, I noticed a dog that looked an awful lot like the same dog sleeping in the former neighbour’s yard. Since I had taken some pictures of him in the summer, I compared him to the pictures and, sure enough, it was the same dog. I called the real estate agent to get in touch with my former neighbours, and after a great deal of time, I finally found out that they had asked someone to look after the dog, but that it had run away and returned to its former home. I’m not sure whether that story is true or not, but it is clear that they didn’t have any intention of looking after the dog anymore. They had moved to an apartment building and there was no way for them to keep the dog. They offered to take him to the pound (which would mean that he would die within one week), but I refused to let that happen. So, now I am the proud owner of my former neighbour’s dog, whose name was Fugu (but who was renamed “Richard The Lionheart” soon after he adopted me). 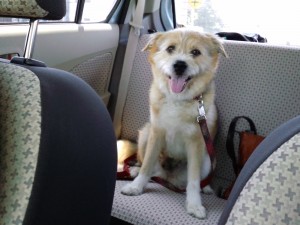 When I checked his records at the city hall, I was told that my neighbours had registered their ownership of a dog named Fugu who was born in 1999. They also said that the dog was a Shih Tzu (which Richard is not), but I assumed that was a clerical error. I also asked some of my current neighbours and they agreed that Richard had been around for a long time, so I just assumed that he was around 11 years old.

When I took him to the vet, I was told that he had heartworm and that there was nothing that could be done about it. I figured that he was old and sick and probably wouldn’t last out the year. During the summer months, I gave him heartworm prevention medicine, but other than that I didn’t treat his sickness. 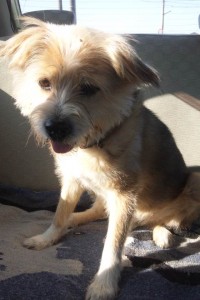 I had to bring Koi, my cat, to the vet last night for her shots, so I thought I would bring Richard along for a second opinion. His coughing was getting really bad and I had run out of the preventative medicine, so I thought I would give it a shot. (I brought Richard to the closest vet to my house originally, but Koi has been going to a vet in Ninomiya since before I moved to this new place, so her vet is different.) My cat’s vet took one look at Richard and said that there was no way he was 11 years old. She thought maybe he was more like 7 or 8 years old. She also said that there was a treatment for heartworm, but that it was expensive, so I had to decide if I could pay for it. He would need an x-ray, ultrasound, and a blood test to figure out the best treatment. If he is determined to be a good candidate for treatment, he would have to take three different pills for about two years. One of the pills will hopefully kill the worms and the other two pills will protect his organs so that he can live long enough for the other pill to work.

I don’t know all of the details of the costs, but there is no way I want Richard to suffer if he doesn’t have to. It is heartbreaking to watch him cough. When I told my friends about this development, they told me to figure out a way for them to donate towards Richard’s medical fees so that he could get the treatment he needs. I am a bit embarrassed to ask for money for this, but it certainly will help me out. I will keep track of his medical bills and if the amount I receive is more than his bills cost me, I will donate the extra to Japan Earthquake Animal Rescue and Support, which is a group that is doing amazing work up north in the tsunami- and radiation-affected areas of Japan.

Here is a ChipIn widget that you can use to donate towards Richard’s medical bills.

I’ve never done this before, so I’m not sure if it is going to work smoothly. Fingers crossed! 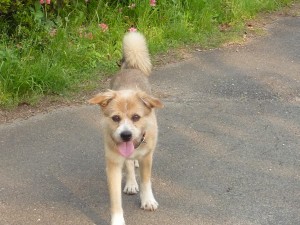 Richard and I thank you very much. (Koi begrudgingly does too.)

What did I say?